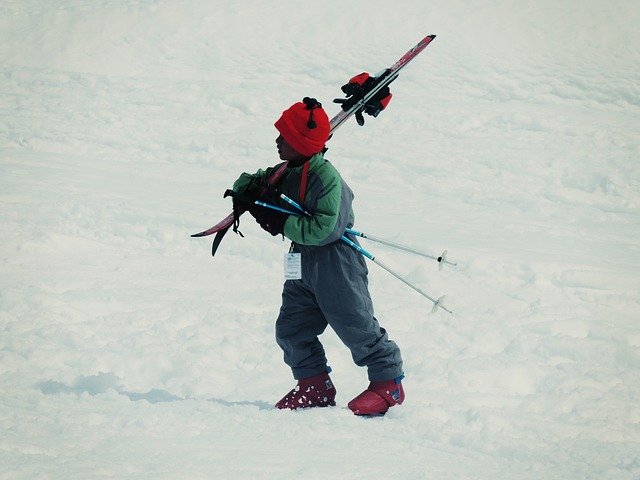 When I told my buddy Mike that my eight-year-old daughter and six-year-old son would be taking skiing lessons through their school next week, he reminded me that his own daughter had been skiing since she was three. Last year, when Mike and I were talking about skiing —before my kids had shown any real interest in the sport — he had encouraged me to take them to the slopes, assuring me that the younger kids learn, the safer they are, and the more naturally they adapt to the sport. Due to shortages of money, time, and trust that my babies would survive the bunny slope, however, somehow the winter slipped by with no skiing for my darling little daredevils.

My own skiing experience is pretty limited, despite having grown up in New England where ski mountains are plentiful. I doubt I’ve clipped a lift pass onto my jacket more than half a dozen times. The last time I spent the day paying for, essentially, assisted gravity, I got over-confident, gained more and more speed, and flew off the trail into the woods, stopping only with the help of a large conifer. My then-girlfriend assured the winsome and concerned Ski Patrol responder that I was fine, that I endured these sorts of calamities all the time. So take your Suzi Chapstick smile and slide on down the hill, sister. And I was fine. I regained my breath a mere 20 minutes later.

So when my wife told me that she was signing the kids up for the skiing option as part of the school’s “Winter Enrichment” program, I felt a ripple of panic wash over me (They liked bowling last year; what’s wrong with bowling?). The ripple swelled into a wave when I ran into Mike again, who regaled me the chilling tale of his family’s Christmas Eve ski trip, when he had to ski like lightning to reach his daughter, now six years old, to, basically, knock her over before she crashed into the trees less than six feet away. She survived the trauma just fine and ended up enjoying a few more runs down the mountain. He said his heart didn’t stop pounding against his ribs for the rest of the afternoon.

But the thing is, see, we live less than ten minutes from a small, family-owned alpine ski facility. I would be a fool to let my paranoia about high-speed sports become a permanent obstacle to my kids’ getting the most out of a season that, here in New England, can last nearly six months. Besides, what if their first time skiing doesn’t happen until they’re teenagers? Not only will they be embarrassed to be the only kids who don’t even know how to “snow-plow,” they’ll also run the risk of going down a mountain trail whose difficulty exceeds their ability, either through peer pressure or through pure youthful stupidity.

I swallowed the lump in my throat and did some homework on ski-related childhood injuries. More importantly, I found out what the experts recommend to keep kids safe on the slopes. Here’s what I found out.

However devastating fatal skiing accidents are when they happen to a loved one, deaths on the slopes are rare and have been in decline during the last decade. The National Ski Area Association reported that there were only 32 deaths during the 2012–13 season. That number works out to 0.57 fatalities for every million ski/snowboard visits nationwide. Similarly, NSAA observes, the United States experiences 33 deaths due to lightning strikes during the same time period, according to the National Oceanic & Atmospheric Administration.

The relative infrequency of fatal skiing accidents, of course, should not lure parents into a false sense of safety. Injuries of varying degrees happen every day during ski season. The Orthopedics Institute at the Children’s Hospital, Colorado (I’m thinking that if anyone knows about kids and skiing accidents, they do) reports that the most common ski injuries include knee, ankle, and thumb sprains. (No texting for a month?! Aaaaaaah!)

Injuries more commonly seen in snowboarding, they note, include the wrist, shoulder, and head. Wrist fractures (broken wrists) commonly happen when the hands and arms are used to brace falls.

Both skiing and snowboarding, says the Orthopedics Institute, come with the risks of:

• Arm and leg fractures (broken bones)
• Concussions, usually caused from falls on ice or collisions with other athletes, trees, or the ground
• Ligamentous knee injuries such as medial collateral ligament (MCL) and anterior cruciate ligament (ACL) tears, with MCL strains being the most common knee injury
• Ankle sprains
• Muscle strains of the lower extremities (legs) and back

According to STOP (Sports Trauma and Overuse Prevention) Sports Injuries, an initiative of the American Orthopaedic Society for Sports Medicine (AOSSM), most of these injuries can be “prevented by proper physical preparation, suitable and properly adjusted equipment, and common sense.” They list some of the most common contributing factors to skiing injuries:

So what about helmets? New Jersey mandated in 2011 that anyone under the age of 18 is required to wear head protection while skiing. The National Ski Patrol recommends helmets for all skiers, although the American Academy of Orthopaedic Surgeons (AAOS) warns that “studies show that helmets offer considerably less protection for serious head injury to snow riders traveling more than 12–14 mph.” That does not mean that the association recommends against helmets, however.

“In all recent studies,” says the AAOS, “helmeted skiers, who have sustained head injuries, have had better outcomes and had less temporary or permanent neurological loss/impairment than those not wearing the proper protective headgear. There is very little potential risk associated with wearing a helmet. However, should an accident occur, protective head gear could significantly decrease risk of serious injury.”

In the end, no amount of protective equipment will safeguard a young skier who either overestimates his abilities or underestimates her body’s warning signs. Parents have to hope that the common-sense lessons we’ve been trying to impart to our kids since before they could walk sunk in enough to make a difference once the lift drops them off at the start of their dizzying descent. If not, perhaps the International Ski Federation’s 10 Rules for the Conduct of Skiers and Snowboarders can up the difference.

My kids start their downhill adventures this coming Monday. While I feel slightly encouraged after reading, I’ve decided to go as a chaperone so I can be on the slope with them, watching from the sidelines, hoping they just have an exhilarating time and leave the hand-wringing to me.

Comments Off on Hitting the Slopes — preventing youth skiing injuries